The doctor-friend wanted something cold to drink.

Because we were in Estancia Mall, I had only one place in mind: B&B Burgers & Brewskies. It was in December 2013 when B&B opened its doors to the public, just in time for the holiday season. Their first branch is in Burgos Circle in Bonifacio Global City. Their second branch – where my friend and I were headed to – opened in January 2015.

For a Sunday dinner service, I thought it odd that people only sat at the bar and left tables and booths unoccupied. Then again, it was the Halloween long weekend; people were off to the provinces or at cemeteries tending to their dearly departed.

Guess we were the jolt needed to put the whole staff into action. From watching one of the two big TVs, a couple of them raced to us as we entered. We had the pick of the whole place. They directed us to a corner booth and handed us the menus with great haste. Still, they were careful not to leave a single drop of water they poured into our glasses. 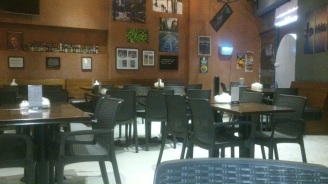 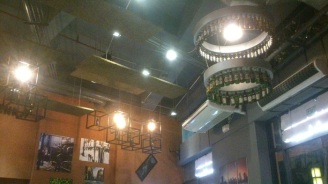 Empty bottles in the air

Album posters on the wall

My eyes darted across the whole room. Because it was practically empty, I had a better look at their décor. Empty bottles lined a partition; some hung from the mobile that surrounded lighting fixtures, distracting me from the exposed ceiling. Framed photographs and epigrams, menu specials, and album posters dotted the walls.

Some five minutes after we were seated, we gave our server our choices for dinner.

I excused myself and went to the restroom. Inside, it smelled clean and was well-lit. Also, I discovered that B&B’s humor doesn’t end in the dining hall: the sole toilet in the men’s room boasted that it is the best seat in the house. Who’d be uncomfortable sitting there?

When I returned to the table, my friend and I were treated to the taste of our cold drinks: his was a glass of Fresh Lemonade (120.00), mine was Cucumber Lemonade (60.00). Next given to us were my friend’s Cheesy Bacon Fries (125.00). I didn’t hear any complaints from him so I guess it was good.

But what we were holding out for were the burgers. All B&B’s gourmet burgers have 1/3 lb of 100% US beef patty, which are made fresh daily and are cooked medium “to preserve its tenderness and distinct flavor”. My friend had the Flipped (215.00) while I had Neat (180.00). His burger proved to be challenging yet conquerable. I found that mine, despite the name, was the opposite: caramelized onions dripped, no matter where or how I bit. And it was already like that when it was handed to me! I had fun eating it though.

Yet, the biggest surprise was the last item I ordered: the Krispy Pinkies (175.00). These tender chicken fingers are covered in rice crispies, so there was unique crunch to them. And dipping them into honey mustard was a sweet treat.

Despite the almost dead air in the whole area on the call of a long weekend, we still felt alive in those few moments at B&B Burgers & Brewskies. Dinner with them was a good choice.

What do you think? Cancel reply